After compiling the Top 10 Rare Games list, I realized I actually hadn’t checked to see which games were currently most expensive; I was just going off of my memory of which were hardest to acquire.  So, I decided to add on a little section that covers the next 10 most valuable NES games, some of which are currently going for prices that place them at least 7th on this list.  But, let’s keep it simple and just give a quick sentence or two for each:

GUN-NAC
More like Gun-Crack because, y’know, the addictive gameplay!  Arguably the best shooter on the NES.  Along with Bomberman II and Little Samson, it’s the only rare game to make the Top 100 Aggregate List.

First of all, this Burt Reynolds lookin’ motherfucker is not a kid.  Second, this game is full of almost every racial stereotype from the sombrero wearing, tequila drinking Mexicans to the Fu-manchu sportin’ Chinese villain.  Third, it’s kind of an interesting action RPG hybrid that kind of reminds me of a crappier Goonies II.  Fourth, it’s a co-op game which makes it infinitely more interesting than most of the other games on this list.

It’s basically Chip and Dale: Rescue Rangers, but with the Jetsons.  You pick up and throw an unnecessary amount of boxes but instead of acorns you find pills, lots and lots of pills.  Maybe they’re actually tiny dehydrated meals since this takes place in the future?  Soylent Green is people?  Damn it, I would’ve run wild with this joke in another section.  Oh well, it doesn’t matter.  Next!

Sadly it’s not a game version of the Bjorn Borg v John McEnroe documentary, but instead a colorful and well designed puzzle game.

If this game were 2-Player, I think it would be one of the top 20 NES games period but sadly it’s not.  I talk about it pretty extensively in the Hidden Gems section.

It’s the same general gameplay of every Bomberman ever made, just with better graphics than the original NES version.  Along with Gun-Nac and Little Samson, it’s the only other rare game to make the Top 100 aggregate list.  On top of that, it’s one of the few games that uses the 4-Player compatibility like the NES Four Score accessory (although technically you can only play with a max of 3-Players).

Since it’s honestly the only real 2D fighting game on a system that was way outdated by the time Street Fighter II came out – along with a controller that only has two buttons – I gotta say that TMNT TF is actually a decent effort.  I mean it’s pretty primitive and probably won’t hold you interest for very long, but as an attempt to take a 16-bit design onto the 8-bit NES, it’s kind of a marvel. 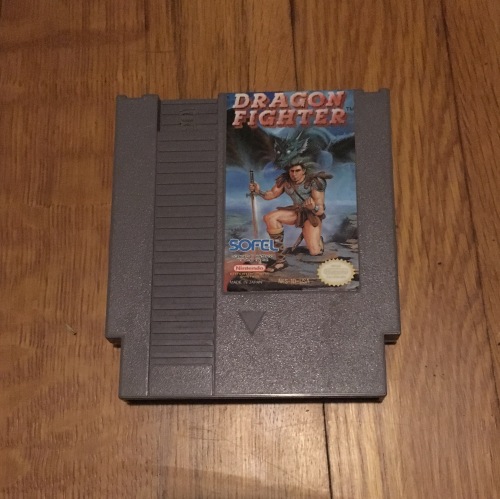 Boy this has been sloppy!  What can I say, I didn’t get into collecting for the value of the games and making an article about just that factor has been trickier than I thought.  Dragon Fighter is currently the 9th rarest official NES game and I totally spaced on it probably because it’s one of nine NES titles that begin with “Dragon” and other than the Dragon Warrior series I get them all confused.

I did intentionally leave the rarest game off this list: Stadium Events.  For those that don’t know, Stadium Events was released as a companion game to an early version of the Power Pad called the “Family Fun Fitness Mat”.  When Nintendo bought the rights to the Triple F Mat and re-released it as their own Power Pad, Stadium Events was recalled and repackaged as World Class Track Meet.  So yeah, it’s one of those instances where something’s rare because of a small misprint or imperfection in the design or in this case an alternate label and startup screen.  YAWWWWWWWWWWWNNNNNNNNN. So that’s it, that’s why it’s rare.  If you want to know what Stadium Events is like, save yourself the 10 Grand and just play World Class Track Meet.

I’ve been tracking sales of this game on Ebay and it doesn’t come up very often.  When it does I have no idea whether it’s real or not.  There are a ton of forgeries out there and the differences between the real deal and a fake are sooooooo subtle that I really can’t imagine that even if I could afford it that I’d be 100% confident in its authenticity.  It’s truly some CSI level shit.  Recently my sister got me a reproduction copy for my birthday, and since it came from her and was very sweet I’m taking it as a sign that I really don’t want or need this game for my collection to feel complete.